Field of Teams: Building it so They’ll Come with Change Management 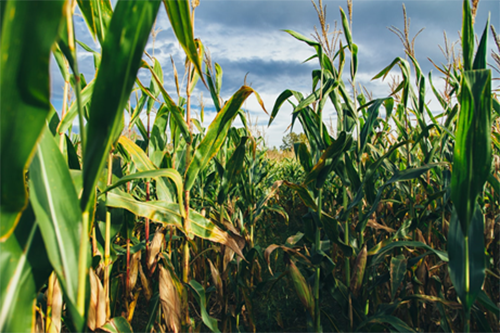 Field of Dreams is a delightful movie. If you haven’t seen it, do yourself a favor and curl up on a do-nothing night and watch it. It’s about an Iowan corn farmer who interprets the voices he hears as a command to build a baseball diamond in his fields. I know, super crazy premise, but I promise, it’s touching. Mid-90s Kevin Costner is exceptional.

But even if you haven’t seen Field of Dreams, I’m sure you’ve heard the most famous line from it, “if you build it, he will come.” But since language is more fluid than the ocean, and changes to suit the context du jour, you more than likely have heard it as, “if you build it, they will come.”

Oftentimes, this phrase can be accurately translated to, “don’t worry about people, worry about making the thing. Once the thing is made, and perfect, everyone will see how great it is!”

Big red sirens blare through the brains of change management specialists when they hear this phrase. “If you build it, they will come” willfully ignores one of the biggest factors that impacts whether a new piece of technology is adopted, a new organizational strategy is implemented, or a new process is installed: people!

Whether you’re raising baseball ghosts in a cornfield in Iowa, or implementing something new in an organization, you still need to be smart about how you engage people. Now, people are not the only factor, of course. If it’s not built, then, well, no one will come. But people’s assumptions about what makes a change successful are often off base.

Word to the wise: people who work in so-called soft fields really don’t like the word soft to describe their discipline. We’ve heard people dismissively describe stakeholder engagement, communication, coaching, leadership mobilization, workforce strategy, organizational design, training—and any other capability associated with change management—so often that we can accurately describe what our brain looks like from extreme eye rolling. If we’re using hard to mean “challenging,” the soft stuff is the hard stuff.

IBM has been running a study for over 10 years on what makes organizational change work, and they’ve consistently found that the factors most challenging in implementing change don’t have to do with building it  (Jorgensen, Breuhl, & Franke, 2014). 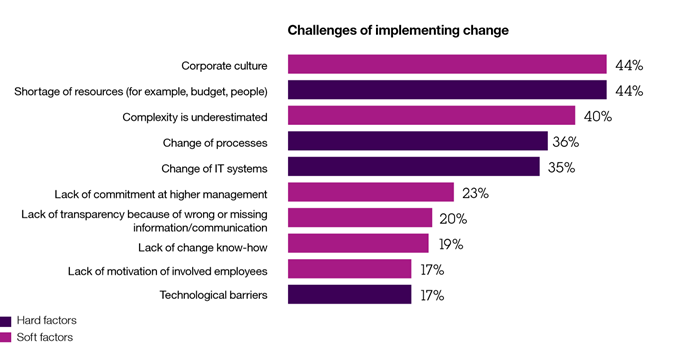 If Field of Dreams happened in real life, it would start a real and existential crisis. If Ray Kinsella (the Iowan farmer in Field of Dreams) announced to the world, “Hello. Ghosts are real. They play baseball. Come to my farm,” you can imagine the headlines:

People would certainly come, but is causing total chaos really the goal here?

On a much smaller scale, we see this all the time in organizations: a leader becomes hyper protective of their work, involves only a very tight knit circle in developing it, launches an initiative with pomp and circumstance, and then is confused because there isn’t much traction afterward.

This isn’t new. There’s an old Chinese proverb that says, “Tell me and I’ll forget; show me and I may remember; involve me and I’ll understand” (Xunzi & Dubs, 1928). Study after study has shown that if we meaningfully involve people affected by the change in the process, they are more likely to adopt it, and the way to get people involved lies in change management.

John Kotter, an author and thought leader on leadership and change management, has developed an 8-step process for guiding organizations through change. 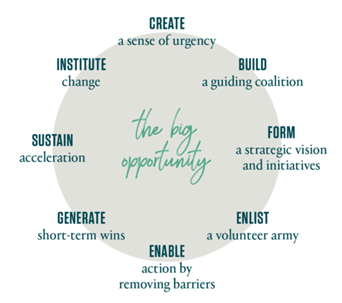 Deconstructing each stage could be its own blog post, but the CliffsNotes are that the first four stages are ultimately about involving stakeholders affected by the change early on in the process. In a sentence, it’s about creating a sense of urgency around something that needs to change, which helps provide energy for a guiding coalition to form a strategic direction that drives a volunteer army to start executing. Often, leaders want to skip to step five, “Enable action by removing barriers.” But as Kotter says, “large-scale change can only occur when massive numbers of people rally around a common opportunity. They must be bought-in and urgent to drive change – moving in the same direction.” (Kotter, 8 Steps to Accellerate Change, 2014).

Prosci, a change management research and consultation firm, has also been running studies for over 10 years on what makes organizational change work. They’ve consistently found that active and visible executive sponsorship is the biggest contributor to success for a change (Best Practices in Change Management, 2016). They provide the energy, direction, and authority to drive change through an organization.

But leaders often have a tough time communicating about changes. It’s hard. You have to:

Threading the needle between these conflicting goals often requires an unholdable needle and unseen thread.

One way that leaders can take some burden off themselves, and improve effectiveness for change communication, is to delegate and involve others. Prosci also states that supervisors and managers are typically the most credible and impactful messengers for a change message (Best Practices in Change Management, 2016).

Leaders should involve supervisors, managers, and affected employees early in the change process so that they not only are prepared to communicate, but they are given an avenue to help shape the change in a meaningful way.

Build it with People

The voice urging Ray Kinsella to build a baseball diamond shouldn’t have tortured only poor old Ray. If it also was talking to his family, neighbors, and Iowan authorities, Ray might not have gotten so many odd looks around town while talking to people about his baseball ghosts. It also would have made for a considerably worse movie. Far less drama. But we can help our leaders avoid drama and increase the likelihood of success for an initiative by incorporating change management early in the process—this way, the people who will benefit from its success can be more involved in making it successful. Because if you build it, and involve people in the process, they’ll already be there.

Danny McLean is a Strategic Communication and Organizational Change Management Specialist at MITRE. He has helped government sponsors from over a dozen agencies and departments strategize, plan, and communicate about change. He is also an instructor for MITRE’s Guiding Change course, which teaches sponsors and MITRE employees about how change affects individuals and organizations, and the tactics that can be used to drive progress.

Supporting sponsors to solve their own challenges: Moving from exulted expert to guide

Thinking Outside the Boxes and Lines: Factors to Consider Before Restructuring