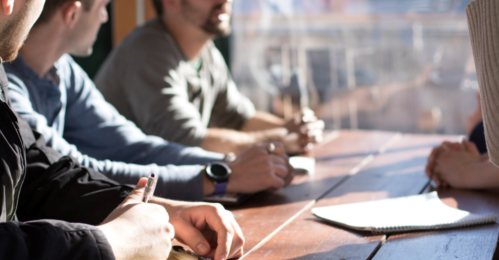 MITRE loves data. MITRE practitioners are passionate about solving problems using scientific evidence, and this is just as true for social scientists at MITRE as it is for engineers. Here is how MITRE practitioners use data to ensure that our recommendations on strategic communication have the greatest possible impact.

MITRE helps our government sponsors design and implement many kinds of change. Since research tells us that most major change efforts fall short of their goals, we carefully examine research on the successes. Does good communication make a difference? If so, what are the ingredients of “good” communication? Here’s what the scientific research tells us.

For example, during a corporate merger, researchers (Applebaum) conducted a controlled experiment inside one company. They compared two approaches to communicating decisions about downsizing and other changes during the months after the merger announcement. The channel, message, and timing were different.

Why face-to-face with supervisors?

When employees hear about major change from their direct supervisors, their support for the change is:

Why? Major change means uncertainty. Dialogue can resolve questions and subtleties, and employees trust the supervisor they work with each day.

Formal channels and top management meetings, like town halls and newsletters, are important, but only as support for more small-group discussions between staff and their direct supervisors.

Communication during a change effort must be managed like any project. It must have a plan, clear roles and responsibilities, and performance measures that will allow for mid-course corrections. It must be aligned with both the overall change project’s objectives and the target organization’s culture—no small feat. Projects that engage a communication professional throughout each phase of a change effort will have the best chance of benefitting from strategic communication—one of the most powerful tools in the change professional’s toolkit.

Jeff Brooke is a principal with The MITRE Corporation, where he advises government executives in organizational change management and communication. He’s also an adjunct faculty member in Northeastern University’s graduate program in corporate and organizational communication. Jeff worked within government at three agencies, including many years as a communication director, and helped found the Federal Communicators Network.