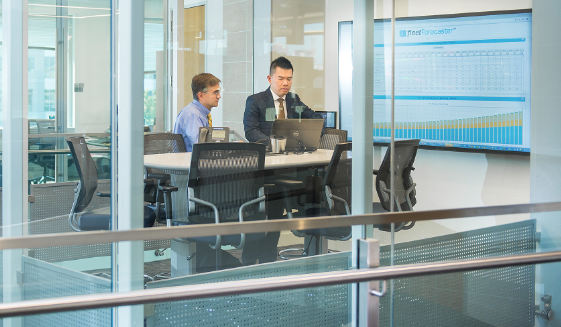 This award-winning project enables the Federal Aviation Administration (FAA) to forecast the future aviation fleet in the United States and was featured in MITRE’s 2018 Knowledge Advantage Showcase.—Editor

MITRE is helping the Federal Aviation Administration predict how commercial aircraft fleets will grow and evolve in the future. The insights help the agency plan for the future of the National Airspace System.

To keep the National Airspace System (NAS) running smoothly, the Federal Aviation Administration needs good projections of air traffic growth and the evolving capabilities of commercial aircraft. That includes anticipating how many flights airlines might schedule in a given year, what routes they would serve, how many passengers and how much cargo they would fly, and the types of aircraft they would use.

That information supports the work of multiple FAA offices. For instance, some FAA analysts use fleet forecasts to predict which airports might soon reach capacity and where congestion might be a problem in coming years. Others monitor and predict aviation emission levels, based on the number and mix of aircraft traversing the nation’s skies. Still others seek to understand when certain technologies aboard aircraft will become common so that new, more efficient flight procedures—which depend on those technologies—can be widely adopted in the NAS.

For many years, the FAA contracted with an external vendor to provide the forecasts. But in recent years, the agency decided it needed a more flexible capability than the static reports it had been using. The FAA asked MITRE to find an agile approach to exploring the agency’s current and future needs, and to develop a capability that would meet them.

That led to the creation of MITRE’s fleetForecaster™. It is a web-based tool that both MITRE researchers and FAA analysts now use to forecast the nation’s future commercial fleet inventory.

“There are two parts to the tool,” says project leader Simon Tsao. “One provides fleet forecasts for the entire NAS. That gives analysts a look at the expected U.S. air carrier fleet in some future year. The forecast extends out as far as 40 years.”

The second part of the tool provides a breakdown of that nationwide overview. “It’s at the airport level,” Tsao explains. “For example, an analyst can use fleetForecaster to see what the expected mix of aircraft types would be for flights flying out of Washington Dulles International Airport in a given year.” The FAA has had access to the NAS-wide aspect of the web-based tool since 2016 and the airport-specific capability since 2017.

The tool provides a much more automated system for collecting and preparing the necessary datasets, applying algorithms and logic to that data to create the forecasts, and using those outputs in analyses.

“Prior to fleetForecaster, creating the forecast was a very manual process,” Tsao says. “There was a lot to track and manage. It included information such as aircraft registration and flight data, airline press releases on their plans to order, transfer, or retire aircraft, and Securities Exchange Commission filings with data about airlines’ contracts with manufacturers to receive deliveries of various aircraft. We still have to do some of that data gathering, but it’s a much more manageable and automated process.”

MITRE then stores all the data in a back-end server. “That makes it a lot easier to manage than when it was provided in different forms,” he says. “It’s also more transparent. With the legacy forecast reports, the sources of the data weren’t tracked. In fleetForecaster, analysts can easily see what the various datasets are. It’s all captured on our servers.”

Another of the tool’s advantages over the manually created report is its flexibility. “In the old product, you got one forecast. Analysts couldn’t really see or change the inputs in the forecast,” Tsao says. “With fleetForecaster, they can modify various parameters to see how that would affect forecast results.”

There are any number of “what-if” scenarios analysts can explore by altering the tool’s forecast settings. For example, fleetForecaster assumes a 25-year lifespan for passenger aircraft and a 45-year lifespan for cargo aircraft. “But analysts can change those figures if they believe existing aircraft will be retired sooner than what’s assumed in the tool. That could mean aircraft with more sophisticated technology might enter the fleet sooner, which could affect projections of NAS capacity and efficiency.”

Similarly, if researchers in the FAA’s Office of Environment and Energy want to see what would happen to their aviation emissions projections if a higher number of aircraft with a particular engine type enter the fleet, or if a new type of aircraft were introduced, they could easily recreate a forecast scenario in fleetForecaster for their analysis.

fleetForecaster is also supporting information sharing among the FAA’s diverse analysts and offices. “They all have access to a single web-based tool and a consistent dataset, so they have a shared understanding of what all analyses are based upon,” Tsao says. “That helps facilitate cross-agency collaboration.”

Exploring the Challenges and Opportunities of NextGen Equipage in Real Time