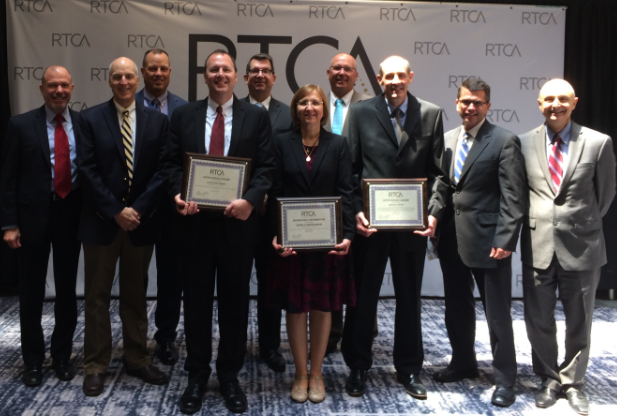 The 2017 RTCA Symposium in Crystal City, Virginia, featured MITRE staff speaking on topics ranging from commercial space operations and the future of avionics to Automatic Dependent Surveillance-Broadcast. MITRE has supported the Federal Aviation Administration (FAA) mission for more than 50 years and has operated the Center for Advanced Aviation System Development (CAASD), the agency’s federally funded research and development center, since 1990. CAASD provides the FAA with advanced technical capabilities in systems engineering, mathematics, and computer science. And one of the many ways staff enable that degree of thought leadership is through active participation in the community and at conferences. —Editor

When RTCA held its 2017 global aviation symposium, MITRE was there in force—participating on panels and taking the pulse of government and industry on a variety of critical areas of focus in the aviation domain.

“RTCA provides a venue where key stakeholders—including Federal Aviation Administration (FAA) executives, aircraft operators, airframe and avionics manufacturers, ground system vendors, service providers, and researchers—can discuss key aviation issues and work to achieve consensus for how to achieve higher levels of performance in both U.S. and global aviation,” said Steve Giles, architect for affordability and investment analysis in the Center for Advanced Aviation System Development (CAASD), the federally funded research and development center that MITRE operates for the FAA. “The symposium helps us continue to build a range of contacts and perspectives that support our ongoing contributions to the definition of the FAA work program and our internally funded research program, and to expand our expertise on the critical issues facing the FAA and the aviation community.”

One of CAASD’s major contributions to the symposium was to convene and moderate a panel discussion on the burgeoning commercial space industry, where panelists discussed what is needed from the FAA and the aviation community to address the growth of this unique new entrant to the National Airspace System (NAS).

“This was a great opportunity for the aviation community to get an informal education on commercial space operations within the NAS from a variety of perspectives,” Fulmer said. One of those perspectives came from SpaceX manager of FAA licensing Kevin Hatton, who told the audience that SpaceX currently has a launch scheduled about every two weeks and a backorder of launch obligations the company is hoping to fulfill on an even more accelerated schedule in the near future.

“Information like that sent a clear message to the aviation operators in the audience that commercial space is here and growing. It’s going to expand into more parts of the country, and the number of operations is going to increase,” Fulmer said. “Another important message the session conveyed was that the commercial space community wants to work with other industry stakeholders to make sure systems are put in place that will work for everybody.”

The Future of Avionics

MITRE Center for National Security Engineering and Spectrum director Chris Hegarty participated in another panel session, “Equipping for the Future.” In that session, global leaders explored the comprehensive global standards necessary for successful implementation of a variety of new technologies that will help meet the need for increased capacity and efficiency while maintaining safety.

Hegarty presented his perspectives as chair of the RTCA Program Management Committee, which has oversight of the more than 20 active RTCA Special Committees that are working on standards for airborne equipment ranging from lithium batteries to detect and avoid (DAA) systems for unmanned aircraft.

In addition to these high-profile roles, attending staff participated in the conference’s many other sessions, gathering information that is informing MITRE’s work on a wide range of projects.

In one session, attendees heard about progress toward meeting the mandate that major air carriers equip their fleets with Automatic Dependent Surveillance-Broadcast (ADS-B) technology by 2020.

“It’s very expensive to retrofit some of the older airplanes with this technology, and part of the decision about whether to continue flying those aircraft or retiring them is the need to have these technologies,” explained Traffic Flow Management/En Route Concepts/Analysis department head Mike Klinker. Some airlines, such as American Airlines, are retrofitting older aircraft where it is economical to do so. Others, such as Boeing and Airbus, are building new aircraft. “Those new planes are going to come online with the required technologies, including ADS-B and Data Communications,” Klinker said “So, as we move toward 2020 and beyond, we’re going to see the availability of these technologies much more evident than might have happened without the mandate.”

Within the general aviation community, the picture is somewhat different. While the Aircraft Owners and Pilots Association (AOPA) is recommending to its members that they equip with ADS-B, many of these general aviation (GA) aircraft owners are reluctant to do so.

“From a system perspective, it’s important that these GA aircraft get equipped, because it allows controllers to know where all the airplanes are, and greater use of ADS-B would enable the FAA to shut down some radars,” Klinker said. “But for GA owners and operators it’s a tough sale because they don’t currently see much benefit to ADS-B over the radar that they have today. From their perspective, it’s about cost versus benefits. But there’s no doubt that ADS-B is the way of the future.”

Work to Do on UAS Integration

In a session on unmanned aircraft systems, the discussion ranged from how to enable certain business uses of these devices—such as package delivery—to how to manage the frequencies and spectrum needed to operate the devices and how to maintain the safety of the NAS and the public on the ground from system failures or the actions of uneducated or nefarious operators.

“This was an instance where there was not yet agreement on how to address these issues, but there was a sense of unity around the need to identify both the issues and the resolutions to the challenges of operating drones in U.S. airspace,” said Fulmer.