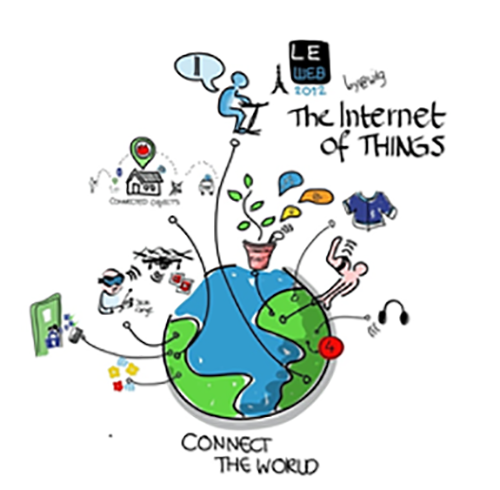 Credit: Wilgengebroed on Flickr, CC BY 2.0, via Wikimedia Commons

Considered the first Internet of Things (IoT) device, the toaster John Romkey created could be turned on and off over the Internet during the October ’89 INTEROP conference! Since then, more people have begun to use IoT devices. Simply put, IoT connects devices with the Internet, from things as simple as smart light bulbs and coffee makers to things as complicated as robots and drones.

Billions of connected devices (e.g., Amazon Alexa and Tesla cars) deliver new experiences to people throughout the world. Unfortunately, as embedded, obscured, interdependent and continual introduction of IoT products and services proceeds, we have lost some ability to know where these technologies reside, or how they impact us. In addition, this growth brings increased security risks – hackers quickly target this rich, but vulnerable, landscape. A Distributed Denial-of-Service (DDoS) attack, occurring on October 21, 2016, brought down Twitter, Netflix, and CNN. It was orchestrated using a Mirai botnet, composed of 100,000 “malicious” IoT devices like digital cameras and video recorders with an extraordinary attack strength of 1.2 Tbps.

In other words, IoT is ubiquitous, but not mature enough to be entirely safe. We face many IoT security threats today, such as these:

To counter various IoT security threats and risks, I propose a four-layered IoT security architecture to achieve the defense-in-depth effect, as shown in Figure 1. 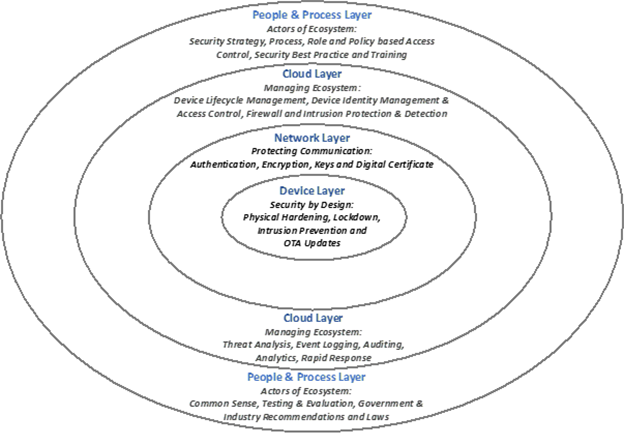 IoT devices must have security by design, or intrinsic security, instead of add-on security or extrinsic security because most IoT devices are “closed.” In other words, customers cannot add security software themselves. Were someone to try, such tampering would likely void the warranty. Additionally, IoT devices must be protected continuously after the software begins running. Host-based protections will help, including physical hardening, lockdown, and network-facing intrusion prevention.

Unfortunately, vulnerabilities will eventually emerge while devices are in operation, at which point the devices will need to be patched. However, nobody wants to visit each device for updates. Therefore, Over the Air (OTA) updates through wireless communication (i.e., making it possible for companies to roll out new patches without having to recall those devices) should be built into IoT devices before they are deployed.

This layer protects communication among IoT devices and the cloud, including:

The cloud layer is the keeper of the IoT ecosystem, responsible for the lifecycle management of IoT devices, including their:

Since most IoT devices will communicate with the cloud, including for data exchange, traditional endpoint security measures, such as antivirus, firewalls, and intrusion prevention and detection are important to protect the cloud. Additionally, three more measures are necessary:

This layer defines what people and processes can do for IoT security, including:

IoT security has become an increasingly critical piece of overall cybersecurity for Federal agencies and enterprises. MITRE has been at the forefront of cybersecurity research and a trusted advisor to Federal agencies and enterprises. In particular, MITRE has established a globally accessible knowledge base, MITRE ATT&CK®, which presents adversary tactics and techniques based on real-world observations. One area of ATT&CK is Internet Accessible Device, which corresponds to IoT security. Meanwhile, MITRE is also building Cyber Analytics Repository (CAR), a knowledge base of analytics based on ATT&CK.

As more sensors are embedded in the advanced systems, such as the F-35’s sensor fusion system, patient monitoring solutions, and smart cities, and, as more things become interconnected, it is becoming more urgent to bolster IoT security for reasons of national security and to enable a safer life for us as individuals.