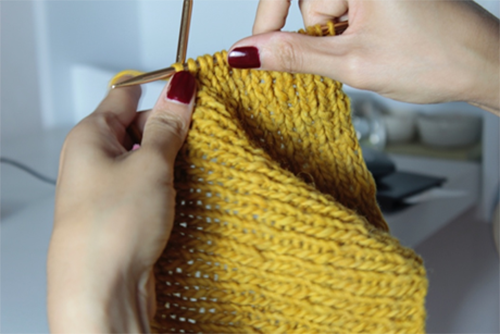 “This is what my knitting tells me: That I have faith in tomorrow. That we are all joined together. That each stitch is vital to hold the garment together, just as each person is vital to this world.” (Bernadette Murphy, Zen and the Art of Knitting, p. 192)

As the Coronavirus began impacting social and professional life, I noticed a lot of friends, family, and acquaintances posting to social media that they were learning or relearning how to knit and crochet. I wondered why there was this sudden interest in learning needle arts, other than having an abundance of time and an overwhelming need to do something with their hands (other than wringing them in despair or washing them incessantly). I also noticed that in announcing this new-found interest, people were binding themselves together while they were forced apart. They were reaching across the social void to create connections through the art and craft of knitting. I was interested to learn more about the trend of “crisis knitting.” In so doing, I rekindled my love for this craft while fostering my own sense of community in a time of novel Corona.

Knitting as a craft has been around since about the third century. Originating in the Middle East, knitting spread along trade routes to Europe and then out to the Americas as Europeans emigrated westward. Initially a household chore in the 18th and 19th centuries, knitting became a fashionable hobby in the Victorian era as mass production of knit wear took off. In the US, knitting’s popularity has waxed and waned, but since 2000, the craft has enjoyed a renaissance. According to the Craft Yarn Council of America, one third of American women aged 25-35 knit or crochet. As of 2016, 28.8 million Americans participated in knitting or crochet. Of these, 71% are female, 29% are male, with fairly even distribution across age ranges (34% are 18-34, 36% are 35-54, and 30% are 55+).

How Knitting Has Trended During Crises

Aside from knitting being a handicraft that results in warm garments, knitting as craft is historically linked with activism. According to an article in The Conversation, people get involved in crafting during a crisis—war, climate change, political activism, global pandemic—because it gives them a sense of purpose. In the midst of a crisis, small acts of crafting become more powerful, providing individuals with a sense of agency through the act of creation. Moreover, it tends to provide historically underrepresented groups or those with limited access a forum in which to communicate and connect. Katherine Durack, former associate professor at Miami University, stated that “needle arts [are] an important means of expression which includes political expression.” Needle art forums like sewing and knitting circles serve as places for individuals—like me—to exchange ideas and provide a path towards involvement and common purpose.

And like Lucy tells Charlie Brown in the Christmas special, I did need to get involved.

Why I Started Knitting

When news of the Coronavirus became increasingly “real,” I felt trapped at home. I was anxious about friends and worried about my family. I couldn’t bury myself in work by going to the office like I normally would. There was quite literally no escape. I needed to do something. Normally, I would turn to exercise, but I was already working out. Our gym had moved to an online format once the governor shut down most public spaces in Maryland, and the workouts were long, cardio-intensive, and HARD. Emotionally, I felt like I was unraveling, like the chorus to this Weezer song:

Then my cousin posted on her Instagram feed a question about what people were doing to get through the crisis. Were they picking up old hobbies or learning something new with all the down time? I realized I had a bag of knitting that I hadn’t touched in about a decade (because you can’t safely knit anything when you adopt a cat) and decided to go for it. I ripped apart the project that had been sitting there for about 13 years and reached out on Facebook to see what I could do with two large skeins of fluffy alpaca yarn. General response was a scarf—quick and easy with my rusty skillset. Even better, people I hadn’t spoken to in years contacted me to say, “Hey, you knit? Me too! If you need help, let me know!”

My act of knitting was also fostering a sense of community.

As I slowly started to cast on stitches for my new project, I felt a sense of relief. I was doing something! I was taking action! I was also finding an outlet for my pent-up anxiety.

Several studies have found that the act of knitting has mental health benefits, including a reduction in anxiety. A 2007 study by Harvard Medical School’s Mind and Body Institute found that knitting lowers the heart rate by an average of 11 beats per minute and induces an “enhanced state of calm” similar to that of yoga. Additionally, the repetitive motion required to create a pattern releases serotonin, which can lift mood, dull pain, and according to a 2011 Mayo Clinic Study, fight loneliness. “Knitting,” according to the report “increase[s] a sense of usefulness and inclusion.”

In Zen and the Art of Knitting, Murphy describes how knitting reflects human connection.

It is this tension—between the rigid and provisional—that knitting best reflects the complexities of human life. As a metaphor for understanding the web of unity connecting all life, and as a practice that puts one in touch with the simultaneous fragility and strength of life, knitting is expansive and fertile. (p. vii)

Like knitting, this situation, which requires that we use virtual tools to connect and engage, is also expansive and fertile. New tools like Zoom, Microsoft Teams, and Doxy.client allow us to video chat and connect on multiple levels; some professional and some personal. In our self-isolation, we have become more creative in how we reach out, creating webs of connection and integration. Although on their face, these webs may appear tenuous—due to bad internet connections, dropped calls, or pixelated images—as we work together in this new space, we find that these connections, like a finished sweater or scarf, coalesce into something “rugged enough to withstand a lifetime” (Murphy, Zen and the Art of Knitting, p. vii ).

The tools we use in this time of social distancing can bridge the physical and emotional distance we feel and bring us closer. They serve to foster a common purpose as we work to support our sponsor missions while enhancing morale. A recent message from MITRE’s CEO, Jason Providakes, echoed this point when he encouraged all employees to use technology to connect with others “just because” to ensure that we feel less alone and stay connected as we continue to support essential mission needs.

Before this message came out, my department had launched a series of virtual coffee hours. Once a week, a group of us will hop on Microsoft Teams to discuss what’s happening in our little corners of the world. Conversations travel the map from what help someone might need on a project to a new recipe or a family update. The point of these coffee hours is to provide mutual support and a sense of connection. These coffee hours (and now, happy hours) knit our department together, and we’ll be stronger and more rugged individuals in the end.

Knitting itself is an act of faith. It is a tentative and slow process, but the end result is something beautiful. As we move through this time of uncertainty, the tools we have to connect us to each other provide the basis for mutual support. Although the process is slow, I believe that every Zoom conference and Teams meeting—like twined bits of yarn—strengthen our bonds and result in something built to last.

Jillian Humphreys is a Senior Business Strategist with The MITRE Corporation. She is a graduate of American University’s School of Public Affairs where she received a Master’s degree in Comparative Politics. She has over 10 years of experience in project management, with an emphasis on strategic planning, strategic foresight, stakeholder engagement and program performance assessment.

She is currently social distancing at home with her two new co-workers: her husband, an elementary school teacher, and her cat who doesn’t understand the concept of social distancing and keeps trying to steal her food. The knitting is going well, and she hopes to have a scarf by the time we’re on the other side.

The Nibbler Method: Problem-Solving in The Pursuit of Mastery