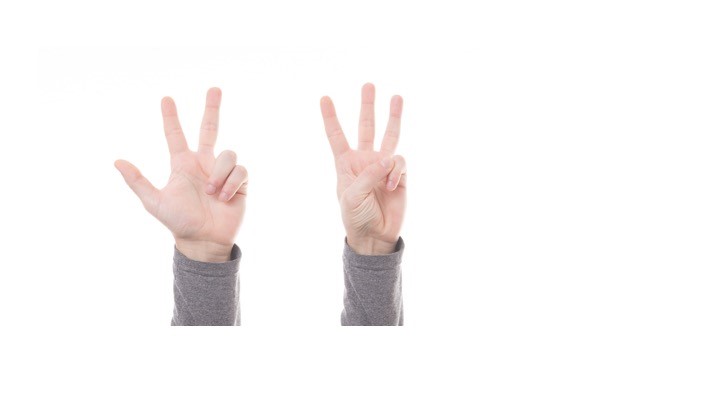 When I read Howard Gershen’s riff on counting with his fingers, what came to mind instantly was theory of mind in the way that I heard Alan Alda explain it at George Washington University as a guest speaker for the Smithsonian. We know that words and pictures work hand in glove, but so do words and numbers.—Editor

I recently found myself counting out something using my fingers.

There, it’s out in the open.

With all the advanced computing power, cutting edge software, and world-class minds at MITRE, I fell back on advanced pre-school mathematics. Luckily, I didn’t have to count higher than ten.

It did get me thinking, though, about how we count with our fingers because I started with my thumb and progressed through one hand’s fingers and on to the thumb and fingers of the other hand. Does everyone proceed that way, or is there another more popular or more efficient counting method when fingers are used?

It turns out that my way is not the only way and may not even be the best.

In any group of people, if you ask them to count out a quantity using their fingers, without thinking about it, some will start with their thumbs, some will start with their index fingers, and others will find different methods. Some use their dominant hand, others their opposite. A 2011 study, “Finger Counting Habits in Middle-Eastern and Western Individuals: An Online Survey,” points out, “While most Western individuals started counting with the left hand and associated the number one with their thumb, most Middle-Eastern respondents preferred to start counting with the right hand and preferred to map the number one onto their little finger….”

How we count and where we start counting seem to be a simple matter but, as research has shown, it is much more complicated.

Each decade, U.S. census takers fan out across the nation and walk up and down city blocks, house by house, to count the inhabitants. There are stories of pairs of census takers in 1900, assigned to adjoining areas, with one person assigned to, let’s say “Main Street,” and the other to “Elm Street.” In the neighborhood, Main and Elm streets intersected at one point, but because of misunderstandings of how to count and where to start, each census taker assumed the other had started with the house on the corner of the intersection…and neither ended up counting that house’s residents.

Fast forward several decades to the world of computer science. Most programmers are familiar with the so-called fence post error: If you’re a cattle rancher who needs to build a new enclosure fence that’s 10 yards in circumference and has a fence post every yard, you need to know when buying lumber that the last fence post of the enclosure is the same fence post that began the enclosure, so you buy nine fence posts instead of ten. Likewise, programmers using C or Python, say, must know that when they store a series of numbers in an array and then read off each element of that array by using a loop, the loop must start with element 0 of the array instead of element 1 (i.e., start counting with the thumb instead of the index finger) if they want to begin with the first element and cycle through the entire array.

Another example from computer science of the importance of where to start counting goes way back to the beginning of computer design and the debate over “Big Endian vs. Little Endian.” Although the details led to much virtual bloodshed, the essence is that multi-byte data can be stored in one of two different ways: Either the first byte (lowest address) is the biggest (big-endian) or that first byte stores the smallest (little-endian). If your computer program is on a big-endian machine, the word UNIX could be stored in locations 0, 1, 2, 3. However, on a little-endian machine, locations 0, 1, 2, and 3 store the word as NUXI, so when you write a program to “pop the stack,” know whether you’re using a big-endian or little-endian machine. The order in which things are counted is everything.

But the differences in how and where we start counting using our fingers has another implication for MITRE and our sponsors, and it is simply that we can’t always assume we are understanding concepts the same ways as our co-workers or federal agency cohorts. Simple concepts. Like does year mean calendar year or fiscal year? Careful: The right answer determines whether January is the first month of the year or the fourth!

When we work with our sponsors in the government, or with experts in disparate fields, when we sit down with people and ask them to describe their business processes in detail so we can document how and where efficiencies can be found, it helps to make sure we’re understanding each other, even on simple things. The effects of a disagreement over the proper way to count with one’s fingers may not have the same disastrous effect as shown in a scene from the film Inglorious Basterds, but it speaks to the way in which two viewpoints can differ in the slightest way but both be valid.

So, the next time you count with your fingers, take a moment to stop and ask yourself, “What’s the most significant digit?”