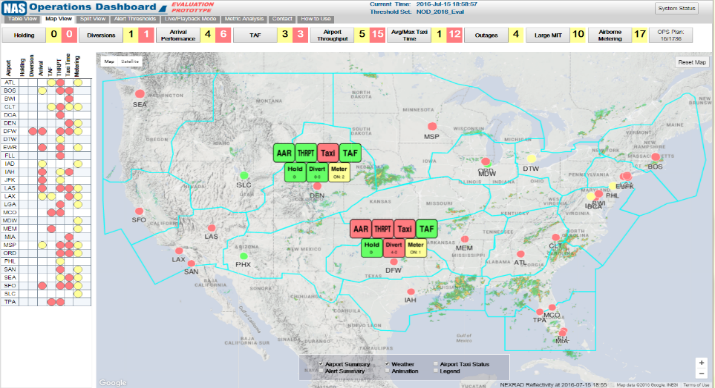 With the increasing demand for a diversity of new entrant operations come a variety of economic efficiency challenges. A MITRE team collaborating with the Federal Aviation Administration and industry experts is developing technology to make it easier for FAA’s air traffic managers to collect and integrate vital data in real time to more effectively prevent and address Air Traffic Flow Management problems and inefficiencies. As pictured, the National AirSpace System Operations Dashboard gives air traffic managers an alert map, with drill-down information, among other information.—Editor

“The job of air traffic controller is simple,” said nobody. Ever.

Coordinating America’s National Airspace System (NAS), with its numerous procedures, complex computer systems, and network of pilots, controllers, technicians, engineers, inspectors, and supervisors, is critical to ensuring that millions make it to and from airport to airport on time.

Data Paradise by the Dashboard Light

Air traffic managers have close to 100 tools available to keep up with what’s going on in the nation’s airspace at any given time. Various and disparate systems monitor airport and airspace demand, assess the impact of reroutes, and track emerging weather patterns. Until now, no single, comprehensive system combined this critical flight information in one easily accessible place.

“From the start, we worked closely with FAA end users to adopt an agile development practice, cycling several times through concept development, requirements, prototyping, and field evaluation,” Tien notes of the project that can impact most people at some time or another in their lives.

With this unique dashboard, air traffic managers at all levels can collectively and more quickly know the “what’s happening and where” details necessary for effective status monitoring, problem identification, solution formation, decision-making, coordination and implementation.

“It significantly reduces the time and effort previously required to collect and mentally integrate this data from multiple existing tools,” Tien says. “It’s a way to more effectively manage air traffic and potential inefficiencies before they become intractable, bringing the knowledge advantage to air traffic managers,” he says.

MITRE featured the project this spring at its 2017 Knowledge Advantage Showcase, an organization-wide sharing event that encourages employees across geographies and time zones to remain engaged and informed about innovative techniques to bring MITRE’s knowledge advantage to work and sponsor missions.

Staci Lindblad writes about complex innovative technologies, advances in interoperability, and making art for both corporate and not-for-profit worlds from her floating southwest DC office on the Washington Channel of the Potomac River. She likes words and isn’t afraid to use them.