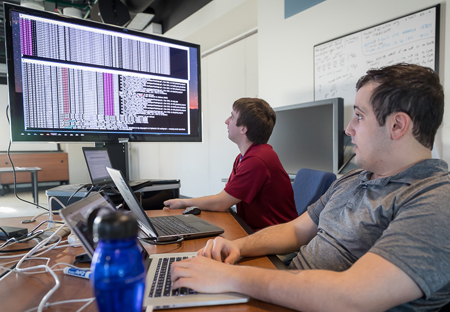 The 42 staffers and interns who participated in MITRE’s 2017 Hackathon aimed to connect around problems not projects. and connect they did, using Discuss@MITRE, Github, Hackathon.io, Slack, our internal wiki (MITREpedia)–and these are just the tools. The teams won awards for spirit and motivation, knowledge sharing, innovation, collaboration, team solution, team building, and a judges shout out. As one of our chief engineers remarked: great, great work.–Editor.

At noon on a Friday this past February, forty-five MITRE employees assembled into teams in seven locations across the country, preparing for the MITRE Mobile Device Hackathon. Approximately 24 hours later, fortified by coffee and Monster Energy drinks, and reenergized by short cat naps, they presented their mock-ups, wireframes, and lessons learned to a panel of judges and the other teams. Their purpose: to better understand how emerging mobile technologies may benefit MITRE’s sponsors.

Today’s mobile devices provide individuals with applications and features that allow them to access and contribute to a vast information ecosystem over reasonably secure and resilient networks. But the technologies these devices rely on do not necessarily meet the needs of the military, law enforcement, and first responders who are reacting to emergencies or incidents. For instance, in the case of a natural disaster, critical infrastructure, and communication networks are often disrupted for hours, days, or even weeks at a time. Authorities or humanitarian volunteers might not have any means to reach these individuals to assess their needs and respond accordingly. Is there a way to use mobile devices in such situations? Can the operations of official jurisdictions be augmented, and are there creative ways to use other platforms or technologies to reach people? And, in the aftermath, how can the information and data be protected and secured?

The MITRE Hackathon explored questions like these, digging deep into these mobile device technologies and how they might be adapted to provide our military, law enforcement, and first responder sponsors with a command and control environment that can be tailored to their specific uses.

Connecting Around Problems Instead of Projects

Department Chief Engineer Chris Schmidt, who works out of MITRE’s site in Quantico, Virginia for the MITRE-operated National Security Engineering Center, was the chief organizer. “The kernel of this event began with a conversation I had with an early career staff member,” he recalls. “This led to inquiries through my network to various staff across the corporation for examples of MITRE’s involvement in hackathons.” What they found was that while MITRE often managed these events, either on behalf of a sponsor or as an outreach effort, the main participants were generally external organizations. “It occurred to us that MITRE could benefit from our internal talent to connect people around problems, instead of projects.”

During the hackathon orientation, Schmidt described the kinds of difficulties mobile devices present to MITRE’s military and civilian sponsors. He noted that the organizers invited as many employees as they could from many different backgrounds to “encourage diversity of perspectives, so that some synergy occurs as you explore technologies that might help our sponsors.” He described the hackathon as a “unique opportunity to collaborate and take advantage of the richness across the corporation.”

Mobile software engineer Taylor McCorkill, a fellow organizer and participant, noted that there are many mobile efforts across the company, “but sometimes we end up working in our silos, not realizing that what we’ve built can help solve problems that other projects and teams across the company have come up against. People from all over the company are here, and hopefully the result of all this working together will be solutions to these problems.” McCorkill’s team developed ” Chief Incident Manager Dashboard, ” a web/Android app that could connect all first responders to each other to visualize relevant data, allowing them to see events by location and time.

Human-centered engineer Brandy Weiss participated in the Hackathon because it was brand new to her: “I have never participated in this type of event before, and I thought it would be interesting to see what kinds of ideas could be generated over a continuous 24-hour period.” Her team developed an app for dispatch responders to view officer data and live mapping data. “We just scraped the top of what is capable of these methods,” Weiss explained as part of the team’s lessons learned. If she would add anything to a future Hackathon, she remarked, “Next year I think it would be great to partner with a sponsor for this type of activity. It would have been interesting to hear what the emergency response community thought of the ideas that were generated!”

During their presentations Saturday, employees shared the challenges they came up against, their proposed solutions, and lessons learned. Several of these solutions have been submitted for consideration for funding under MITRE’s internal research and development program.

According to Schmidt, the feedback from the participants and judges and what the organizers learned will inform future collaborative events like this, and “make it even easier for us to come together as a company to work on tough problems for our sponsors.”

Check out the in-depth interview with the team who won Best Overall Team of the Hackathon, Bao Bao’s Revolt.

Jim Chido is a senior writer/editor in Corporate Communications. He specializes in creating eye-catching content about MITRE events, people, and projects for MITRE’s intranet news center as well as for its internet pages.