Digital Notebooks for Emergency First Responders: A Conversation with the Winning Team of the MITRE Hackathon 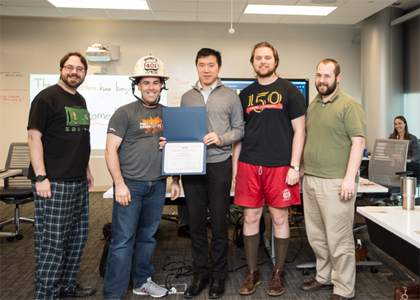 I had a chance to chat with some of team about their iPad app, First Responder’s Notebook. The app is designed to quickly provide first responders with contextually relevant information about an incident address, saving them time and energy when responding to emergencies. A video demonstrating the results of their work during the hackathon is available at the bottom of this article OR you can go directly to the video.

What prompted you to create your app, and why did you name it First Responder’s Notebook?

Kevin: The idea was to provide information electronically to firefighters while they’re in the fire engine responding to a call. The problem is that some fire engines have binders full of pages for each street that tells them where houses are on a street and gives turn-by-turn directions. Our idea was to develop an electronic version of this information. Jeff suggested the name, and it stuck.

I’m a Volunteer Unit Officer in Fairfax County, and this idea stemmed out of my own personal frustrations while responding to calls. In Fairfax, we have binders full of pages of street names and images. If we’re responding to a call on Colshire Drive, we pull out the binder that contains the “C” streets, flip to the page that says Colshire Drive, and we’ll see an image of the structures there. I thought we could leverage technology to improve the process for responders.

You do this in the truck while driving?

Kevin: Yes. The fire engine’s response time is three to five minutes on average. Sometimes it goes quicker than that, and sometimes it’s lengthier depending on time of day, traffic, weather, where we’re going. The genesis behind the idea was to provide first responders with the information that they need to make good decisions, as quickly as possible and requiring little input from the user. Then they can use that three to five minutes to make use of the information instead of having to search for it.

This idea had been kicked around by myself and some other volunteers I frequently ride with. It was certainly not solely my brainchild. The hackathon provided a great opportunity to exert some effort in seeing what was possible.

Tell us about the team.

Jared: I would say Kevin led the team and brought the vision. Jeff, Kevin, and Joey were ready to go since they knew each other and have worked together before. Kevin and I had worked together occasionally over the years, so when we both showed up at the hackathon, he invited me to join the team. I knew Michael, who was there as well, and I invited him to join the team.

Grant: What made this really work was that, together, the team overcame the challenge of quickly understanding a new domain. This enabled us to come up with ideas that could benefit the stakeholders we were targeting.

And why Bao Bao’s Revolt? Do you mean the pandas at the National Zoo?

Jared: Hackathon teams usually have funny names. We literally googled team name generator and came across something we liked. I don’t know who it was but someone said Bao Bao’s Revolt, so yes, the pandas at the zoo. It was intentionally chosen to be funny.

What did each member bring to the team?

Michael: Donuts. (laugh) Not true. The hackathon actually provided really good food, we didn’t have to get much on our own. I worked on the Zillow interface. I wrote the code that would pull the data we needed from Zillow, put it in the database so it could be retrieved, and did some database work with the binder pages so it could be created and stored locally for the hackathon. I also came up with a scheme where each of the pages could be referenced to each other.

Jared: I worked on the backend, making sure the web server was giving the correct information to the iOS app to know where the emergency was as well as providing the tie-in to the data, so it would know what data to display on the app.

Joey: Kevin, Jeff, and I were working on the iOS app itself designing the user interface. That’s Kevin’s background, but we all spent time getting the maps to work, displaying the hydrant and fire locations properly, and having them georeferenced on a map on one of the pages as well as displaying the pages on the street view, and the Zillow information.

Jared: Grant also worked on the backend with a lot of the API end points deployed in an Amazon Cloud environment that the app would ultimately call out to so it would have the data it needed. Grant was really instrumental in getting that part of it working.

Michael: Jeff was limited in the time he could spend but contributed to some of the app and the presentation.

What were some of the technical challenges you faced?

Grant: We ran up against the challenge of using different available configuration management options. For example, Bitbucket ‘Free’ has a limit of up to five users, while we had a team of six. We ultimately settled on Github.

Kevin: We had to switch mid-event and we ran into some issues with multiple people doing stuff at the same time and merge those together and not break it. We had a couple scares at 4:00 a.m. where the app wasn’t working because we couldn’t get the code to meld nicely together.

Grant: We also experimented with different ways to access Zillow APIs. We learned that while certain libraries like pyzillow were advertised as being easy to use, they did not keep up to date with current, documented APIs. It ended up being more flexible to query the APIs directly without a custom library built to access this information. We also experimented with different mapping techniques to explore the use of turn-by-turn navigation. We decided to use turn-by-turn APIs on an Apple Map view to have better control over the display of responder location and turn-by-turn directions.

Michael: It’s a little bit of a disservice to the app to say technically the big issue was pulling lots of information in multiple formats that weren’t normally compatible with each other. The benefit of the app is not just that we were able to pull a bunch of diverse data, but the design itself and how we developed it. Like Kevin was saying earlier, we had a lot of info that we wanted to display in a small space. We wanted it displayed in a clear concise format that was also very flexible.

What do you hope to do with the app now?

Kevin: There has definitely been some internal interest in seeing the project move forward. I’ve shared the idea with some friends who are also Volunteer Unit Officers, and they see a lot of potential for such a tool. We’re currently working on finding a local agency to collaborate with for refining the prototype and conducting a field demonstration.

Any other thoughts on the general hackathon experience?

Jared: Despite the short time frame of 24 hours and the stepping on each other’s toes a little bit with the code, we had a good separation of responsibilities throughout the team and our team worked well with the process.

Michael: I agree. I think we worked together really well.

Would you do it again next year?