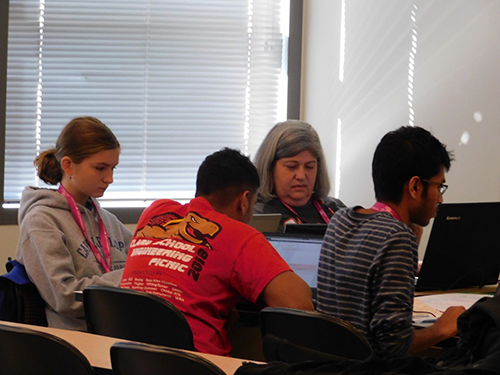 Somewhere on a whiteboard in a classroom at the Universities of Shady Grove, swims a fish. Drawn in black marker, complete with a fedora, sunglasses, and a goatee, the sketchy-looking ichthyoid intones into a word bubble: “I need you to log into www.super-facebook-com.ar31659.pizza and confirm your password, m’lady.” Beneath it, the caption: Catch him!

While this cartoon fish (one of several) may not have made it into the Jupyter Notebook presentations, it indicates some of the fun participants had at the “Catch the Phish: An AI Capture the Flag Event,” on November 10 in Rockville, Maryland, as they learned new concepts, brainstormed how to solve problems with machine learning tools, and collaborated with their team members. 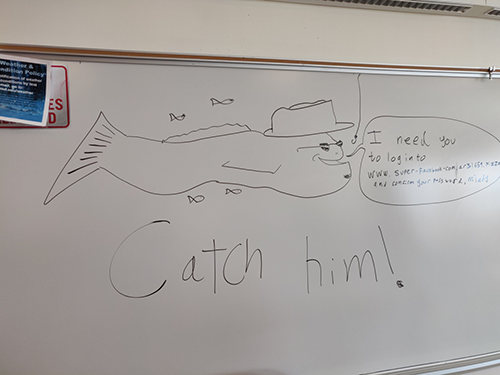 “This challenge was a partnership between MITRE, the Universities at Shady Grove, and the Cybersecurity Association of Maryland, and was aimed at creating awareness of how artificial intelligence could be applied to cyber problems,” shares Michael Balazs, principal technology integrator and one of the leaders of Generation AI Nexus, an educational initiative that aims to expose all students to the power and pitfalls of AI independent of their fields of and inspire them to solve national problems.

As originally conceived, the challenge was a way to exercise an environment for rapidly applying machine learning and AI to big datasets for real-world problems, on behalf of Gen AI. But Catch the Phish accomplished more than merely exposing students to MITRE technology. The event enabled a diverse group of learners to tackle a meaningful problem, learn new skills, engage their common sense, and interact with a roomful of peers and MITRE subject matter experts.

To this end, two dozen participants from colleges and high schools across D.C., Maryland, and Virginia spent their Saturday working on the problem of phishing—a cybercrime in which a person is contacted (usually by email) by someone pretending to be a legitimate institution in order to steal sensitive information from the person. After settling into their teams, participants made their way into the Generation AI environment, courtesy of Reggie Carey, the event’s technical lead. As they began exploring a 6,000-item dataset curated by challenge designer Eric Harley, teams built a model to distinguish benign URLs from malicious URLs.

Four hours and many conversations later, they stood in front of a packed room to share their approach and results with students, mentors, judges, hosts, and prize sponsors.

Lara Van Nostrand, group leader of technical programs for the MITRE Institute and a judge, notes that this type of learning is similar to a flipped classroom, in which students learn about the content beforehand and then step into the classroom to do work (which would have been traditionally homework) – and have a teacher’s feedback and input as they engage with the exercises. “I was really impressed at the level of engagement and learning I saw. The learning was so peer-led – they were given some structure but really were just off and running.”

Armaan Mehta, computer scientist and one of the 10 challenge mentors, noted how helping the participants was a great reminder of how quickly people can pick up new skills and subjects: “The best part of the event was watching some participants go from zero knowledge of machine learning to critically thinking about the consequences of specific lines of code.”

“I enjoyed seeing people code within the Generation AI framework because it created a unified experience for everyone,” relates Ali Zaidi, data scientist and another mentor. “It worked well with everyone having a Jupyter Notebook and the controlled environment in the cloud.” 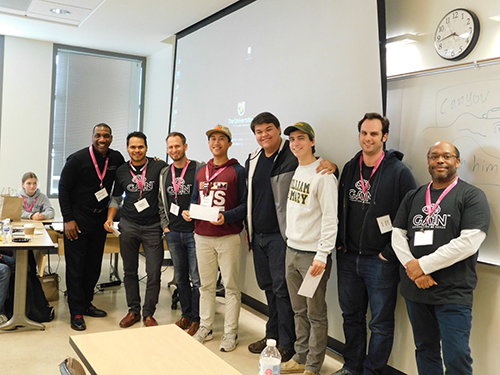 “Even if some folks didn’t have the skills in the truest sense of the word—like knowing how to program in Python—they understood the concepts and saw how AI could be applied to cyber problems,” adds Joe Garner, lead technical training and development specialist with the MITRE Institute and another judge at the challenge. “They gave presentations and when quizzed, it was cool how they were able to discuss the workflow and general idea of what they were doing in a short period of time.”

For MITRE itself, the challenge enabled Gen AI to sign up a new academic partner, the University of Maryland Baltimore County and also the opportunity to expand this partnership to the entire University of Maryland’s system’s through the Board of Regents, which oversees the education of more than 170,000 students. As UMBC and our other early adopters develop curricula to give teachers and students access to artificial intelligence tools and curated datasets with MITRE’s help, these members of the Nexus will open doors for their students to help solve problems of national importance, be considered for internships and jobs in government and industry, and drive the development of the AI economy.

“Working with the university was great,” notes Ron Ferguson, principal computer scientist and event judge. “They were essential to setting up networking, being supportive, encouraging people to participate—it’s a good thing to keep doing going forward, either with this institution or others.”