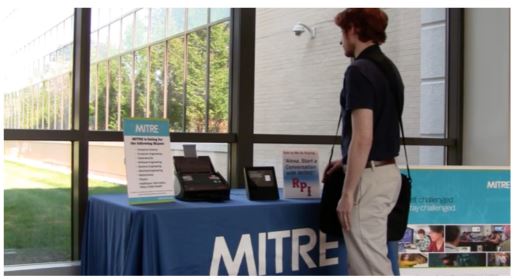 Intelligent voice assistants like Amazon’s Echo and Google Home are quickly becoming an integral part of our daily lives. Echo adoption has increased by three hundred percent in the past year alone. These on-demand, cloud-based voice services can tell us the weather, answer questions, purchase products, and control our home environments, but how do these conversational helpers translate into a business-focused enterprise environment? Will business users be able to control their office environments, and will they be able to get business value from office-based cognitive voice assistants? Can these devices be trusted in the enterprise? At MITRE, we’re trying to answer such questions for ourselves and for our sponsors.

This is the first of a series of posts that explores some early uses cases for intelligent voice assistants at MITRE.—Editor

A student walks up to an unstaffed MITRE table at a career fair and notices a sign that says “Talk to Me by Saying, ‘Alexa, Start a Conversation With MITRE.’” Next to it is an Amazon Echo Show, the small interactive intercom and video screen that employs Alexa technology.

The student is intrigued by the technology, and thus begins a chat between the student and the Echo Show:

“Alexa, start a conversation with MITRE,” the student says.

“Hello, I’m helping MITRE recruit students at this RPI career fair,” the Echo Show replies. “Have you heard of MITRE?”

And so it goes. The student says he’s interested in robotics, and the Echo Show tells him and shows him what MITRE has done in that field.

The session ends with the RPI student loading his resume into the scanner next to the Echo Show and scanning a QR code to obtain a digital copy of the conversation and reference material.

This scene is from a demonstrated pilot capability, but the technology that allowed the Echo Show to engage this student and others in conversation about MITRE and react to their questions is real–and it responds to questions on a variety of MITRE-related topics in real time.

A team of interns at MITRE put this and other cognitive assistance tools together in the summer of 2017, working under the direction of members of the Enterprise Computing, Information and Security (ECIS) Center at MITRE, including Technology Evangelist Doug Phair and Knowledge Management Repository Lead Mary Parmelee.

Using IBM Watson and Bluemix Cloud services along with open source software, the interns developed a cognitive conversational system that allows users to have intelligent conversations with a web chatbot, the SoftBank NAO robot, and the Amazon Echo Show.

The idea is to use these intelligent machines as leave-behinds, at job fairs or in a college recruiting office, to help develop what one might say is a human bonding experience. The chatbot, NAO robot, and Echo Show help MITRE continue engaging with students after the fair. The goal is to make students feel that they can fit in at MITRE because they have interests that align with MITRE’s areas of expertise and corporate culture. Then, of course, there’s the  so-called wow factor of engaging with a cognitive assistant—in other words, chatting with a robot.

The bonding factor is achieved in several ways, said Phair. For example, during the conversation, Alexa maps students’ interests with MITRE Institute classes taught by the MITRE staff, who are experts in their fields.

“This shows the students that MITRE is leading the way in the student’s field of interest,” Phair said. “Also, during the live conversation, the agent has tailored the response for that specific student, to help achieve that personal connection, as in, ‘we have 25 staff who graduated from your school with your degree.’”

The development of the chatbot, NAO robot and Amazon Echo conversational interfaces are only one part of a larger MITRE project, developed by the ECIS members to prototype cognitive technologies.

The ECIS team also developed a method to deliver curated news to end users through a prototype Amazon Show, Parmelee said. The team used news delivered electronically to MITRE from different news aggregators. The collection is curated by the Information Services Department, which distributes custom newsletters via distribution lists to its sponsors and its employees.

Why not deliver it to users the same way the students got their information about MITRE at the job fair?

“We took content, summarized it so it would be conducive to a conversational interface, and delivered it via a custom news feed to Amazon’s Flash Briefing capability,” Parmelee said. “It would give you a daily summary of the type of news you would want to hear.”

Some of the issues the MITRE team grappled with were how, through use of cognitive tools, one can:

The ECIS team and the interns used IBM’s Watson Discovery to match key terms from the conversation with MITRE documents. For parsing MITRE documents and student resumes, the team employed the Watson Document Conversion service to extract text from searchable PDFs, and Apache Tika for optical character recognition (OCR) of PDF images. They used Watson Natural Language Understanding to analyze text to figure out concepts, keywords and even the sentiment of the language.

The chatbot, NAO robot and Echo Show are prototypes, as is the News Reader. But the development of these prototypes proves the concept that they can be built and put into general usage, Parmelee said. The ECIS team is currently piloting the Document Recommender and News Reader as internal MITRE applications.

The next steps? This year, the ECIS team plans to expand its cognitive research to prototype image recognition for intelligent enterprise search and Alexa for Business applications, provide a virtual help desk agent, and continue to evolve the College Recruiter Assistance application.

Tom Nutile covers innovation for MITRE, with a particular interest in the world of the future. He has headed corporate communications departments for technology, healthcare and retail corporations, and has served as editor, columnist, reporter and bureau chief for newspapers along the East Coast.