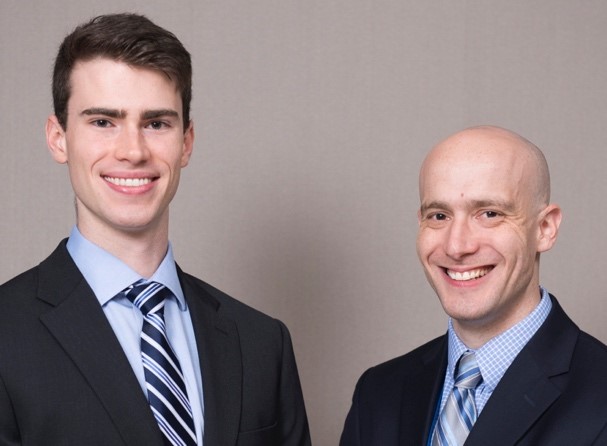 Time, attention, and craft are among the most beautiful, lasting experiences one professional can share with another. The author, a student investigator at MITRE, reflects on the collaborative aspects of his summer sojourn and the results of generous knowledge sharing.—Editor

Photo of Nick Serger and Carl Giller by Jae Robinson

As a college student studying mechanical engineering at Cornell University, I work with teams of students with diverse skills and perspectives. The chance to learn from and with so many fine minds is part of what I cherish about Cornell. This past summer I chose to work at a company that values collaboration as much as I do, and whose staff have minds every bit as fascinating as those at Cornell. MITRE enabled me to learn, share, and contribute to a successful project as a student investigator and full intellectual partner.

The program that drew me in is called the MITRE Nanotechnology and Emerging Technologies Summer Student R&D Program. It celebrated its 25th anniversary this past summer and is led collaboratively by its founder, Chief Scientist Dr. James Ellenbogen, and Emerging Technologies Department Head Dr. Shamik Das. Together, they bring 15 students to MITRE each summer to work on futuristic problems in science and engineering.

The original goal for my summer at MITRE was to replicate an experiment that desalinated water using solar energy and to write a literature review on the current state of this method. Prior to my arrival at MITRE late this past May, Dr. Ellenbogen and my mentor, materials scientist Dr. Carl Giller, had done a lot of planning for the summer desalination effort. So they were able to sit down with me on my first day of work and explain the initial concept and my summer’s agenda. As a result of this planning, plus a lot of hard work and a bit of creativity by my mentor and me, I was able to successfully replicate the experiment and write a complete draft of the literature review. Plus, I was able to take the project beyond the initial plan by designing and building packaging for the solar desalination system so that we could move beyond the lab and successfully test our prototype desalination system outdoors in natural sunlight.

That’s a lot of work to complete in two months. I was able to complete my tasks this summer because the company values what they call reachback, and I call a generous, knowledge-sharing culture.

For example, over the course of the summer, I collaborated daily with Carl. Starting the first day we met, we worked on ideas for how to replicate the experiment in such a short timeframe. I appreciated that he worked with me as a partner, and he was integral to my completing the work as quickly as I did. Carl taught me how to replicate the experiment during which we constructed the solar desalination system, and he gave me advice on how to properly construct my literature review. Without Carl’s help, I don’t know whether I would have been able to even replicate the experiment let alone complete a draft of a literature review or design the packaging. The environment motivated me to work harder and made my time at MITRE very enjoyable.

I also worked with two optics specialists, Kevin Gemp and Dr. Matthew Dunlop-Gray. When Carl and I were replicating the experiment in the lab, we needed the light source we were using to generate one sun illumination on our desalination system. With the help of Kevin and Matt, we were able calculate the proper distance between our lamp and the system so that we could produce the illumination. I appreciated being treated as an equal when working with Kevin and Matt and really enjoyed learning how established engineers tackle difficult problems.

As I mentioned earlier, the only reason I was able to complete the packaging for the system was because of how quickly I completed my other work—which the very generous knowledge sharing made possible. I designed the initial packaging using CAD software and then consulted with Carl about changes he thought would improve the packaging. Then I worked with a staff member from MITRE’s Mechanical and Reliability Department, Elyssa Kaplan, to 3D print the packaging. Elyssa not only helped with the printing, she also collaborated with me on the design of the packaging to improve the structural performance. Before I met her, the desalination system was an interesting concept that I thought could hold benefits in the far future, but because of Elyssa’s help, my project might have more immediate benefits which could be used by people all over the world!

I strongly believe that what one person can achieve exponentially increases with the number of people with whom they collaborate. My summer was as successful as it was because of the people and a culture that embraces even student investigators as full partners on projects of value and meaning.

Nick Serger is a senior at Cornell University and will receive a degree in Mechanical Engineering in December 2017, after which he’ll return to MITRE as a member of the technical staff.