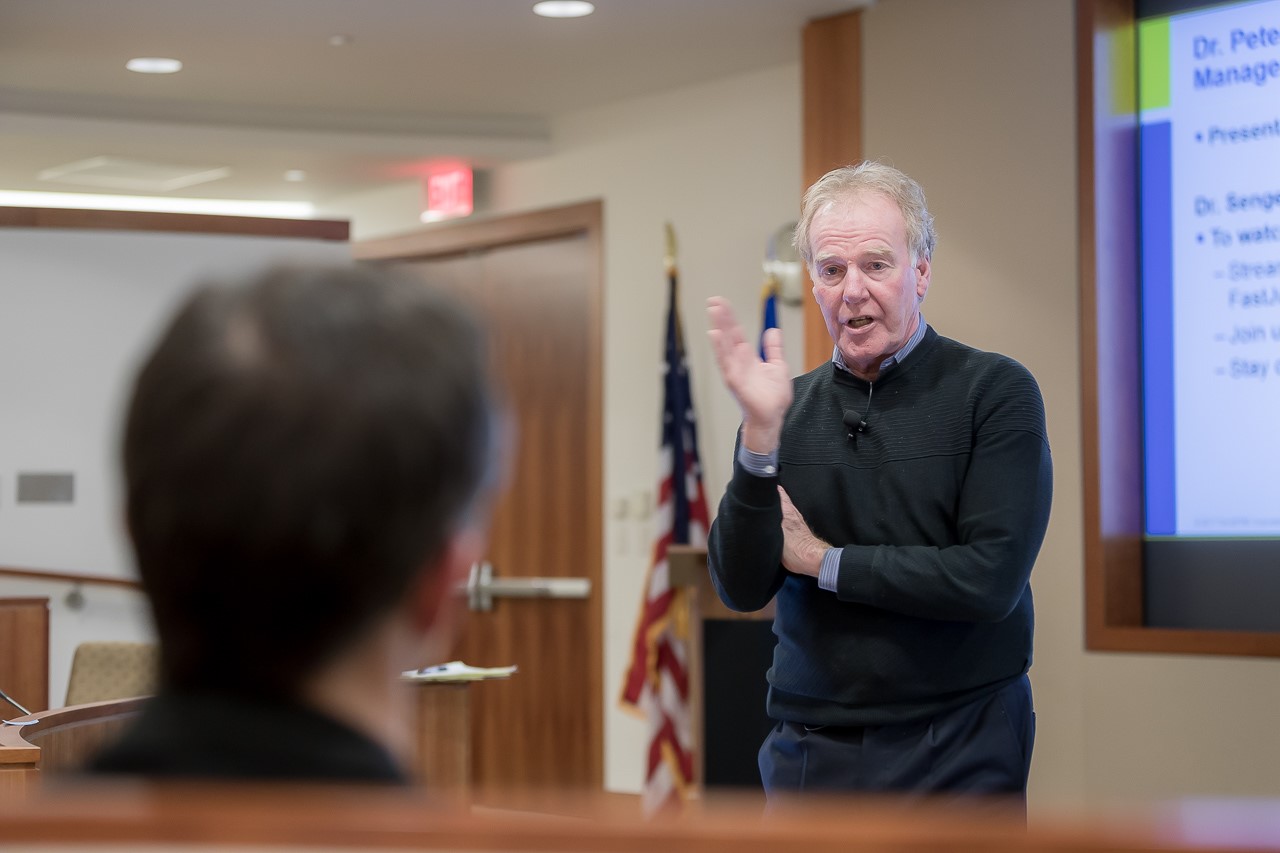 The reward of doing work well

These were only a few of the answers MITRE employees gave to Dr. Peter Senge’s question, “Think of a team you enjoyed being a part of—what made it good?” at our annual Knowledge Advantage Showcase. Speaking from Bedford, Massachusetts, Dr. Senge spoke to staff at our sites across the country.

The Knowledge Advantage Showcase is a MITRE-wide event that highlights the most innovative techniques for bringing MITRE’s core value of knowledge sharing to the company and to sponsors’ missions. In addition to opening remarks from executives and short talks from winning teams, this year’s event featured Dr. Senge, a senior lecturer in leadership and sustainability at the MIT Sloan School of Management. Senge coined the term learning organization in his 1990 book, The Fifth Discipline, a groundbreaking text in business and management studies. Senge spoke to MITRE about how to cultivate such an organization: a company that facilitates the learning and growth of its members and continuously adapts to the environment within and around it.

“It’s a transcendent paradox,” Senge mentioned before asking staff to reflect on the best qualities of excellent teams. “Everything moves too quickly, but in fact, a lot of the key things we have to work with are about slowing down. We’re reflecting on things that are really quite old.” Senge pointed out these qualities of passion, uncertainty, learning, and more were, in fact, quite enduring: “There’s something deep here that’s actually not new at all. What makes a great team, you could ask this question twenty years ago, and the same thing comes out.”

Great teams are needed for great organizations. According to Senge, the first serious study on learning organizations, conducted in the early 1980s by Shell Oil Company, asked the simple question: How long do companies live? [1]

The answer shocked them. The average expected lifetime of a Fortune 500 company was a grand total of 30-35 years—roughly half a person’s lifetime in these industrial societies. They launched a more serious study to explore the question in detail: What characterizes businesses that last two hundred years or longer?

In a time where the metaphors of business likened it to a machine—efficient, reproducible, without wasted energy—the answer surprised them again. Like organic creatures in nature, these businesses could adapt and evolve. What’s more, this adaptation was more emergent than centralized, reflecting a company culture of tolerance.

“Mistakes!” Senge emphasized. “No mistakes, no learning, period. Mistakes make evolution.” A culture of tolerance and purpose where individuals could make mistakes, innovate, and work their best individually and collectively allowed companies to survive and thrive over decades and even centuries.

Opening the conversation to comments from the audience, Senge answered questions about best practices of learning organizations, the notion of structured adaptation within a company, and how to grow a learning organization mindset in other institutions. “The single biggest insight for me,” Senge noted, “is that knowledge seems to move in organizations not because of some brilliant way of capturing and codifying it or coercing people to share knowledge, but it moves when people help each other. A natural human state of relationships is evoked.”

On how to structure this culture and the actions of adaptation within an organization, Senge replied that specific tools, spaces, and practices could certainly help, such as embedding after-action reviews in an enterprise’s methodology, or maintaining a “learning lab” where teams could work, review, and reflect. However, Senge acknowledged there was still a paradox of material vs. transcendent within these practices: “That which is deeply cultural tends to endure, way longer than something physical.” As helpful as artifacts and spaces could be, teams needed a supportive culture most of all.

“We need to have the capacity to be bicultural,” Senge explained with regard to invoking a learning organization mindset in other companies and systems. Being able to navigate between environments and mindsets is critical for individuals, teams, and businesses to adapt. “Know what you’re growing in your enterprise, but also others. It starts with a real interest in other people being successful, even if the system in which they operate, you don’t like much.”

Ultimately, the interactions within a learning organization came down to the relationships between people—allowing them to be who they are and letting them grow and develop in the ways right for them. “The tools don’t solve the problems,” Senge remarked, “the people solve the problems. But without good tools, the capacity to solve problems is limited.” With good tools—and a culture of tolerance, a recognition of other people’s strengths and passions, and the ability to adapt and change—individuals can learn, teams can solve problems, and companies can change the world.