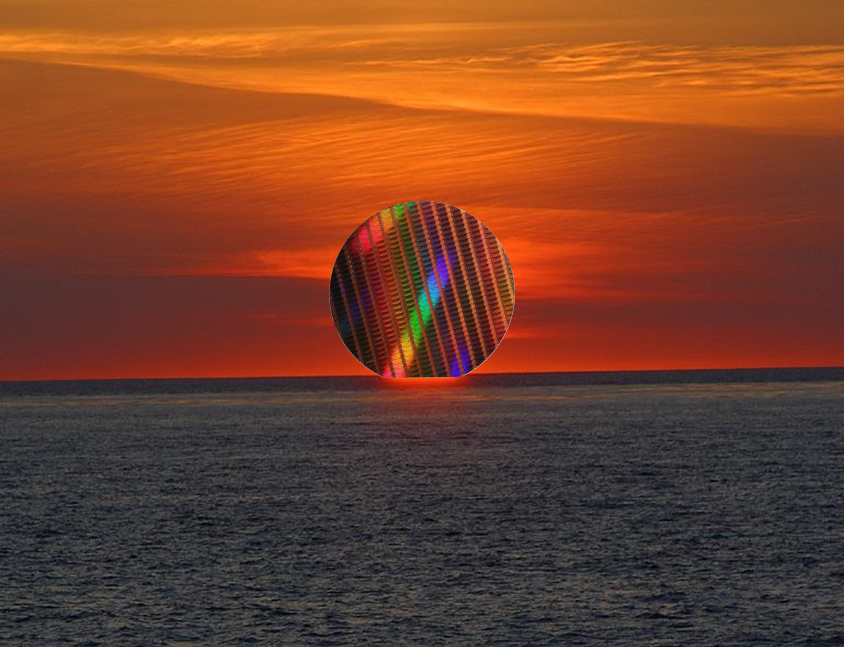 Even now, when I think of knowledge sharing, what first comes to mind are containers or interactions: databases, portals, websites, conferences, messaging—electronics and humans working together. I rarely think about what makes our modern electronic interactions possible: computer chips. Melissa Dolph’s post on the sunsetting of Moore’s law underscores the wonder of the enablers we take for granted and points to the horizon for new ones.—Editor

Moore’s law probably needs no introduction. But just for the sake of completeness… Moore’s law (named after its creator Gordon Moore, co-founder of Intel) extended from a 1965 paper predicting that the transistor (a device that behaves like an on/off switch) density on a computer chip would double roughly every two years, with per-transistor costs continually decreasing. While this prediction was based on only five data points, this approximate rate of increase in transistor density has been realized by the semiconductor industry over the past 50 years. It should be noted, however, that Moore’s law has become somewhat of a self-fulfilling prophecy as the semiconductor industry has made the biannual doubling in transistor count a benchmark to work toward. But still, can you think of a better example of using trend analysis for tech forecasting?!?

So what has Moore’s law given us? Well, we can thank the technology driving Moore’s law – and the semiconductor industry’s drive to keep Moore’s law going – for everything from the personal computer, to the smart phone, to the vast computer networks that support the Internet. As a recent New York Times article points out, without the ability for the devices on computer chips to be made smaller, cheaper, and run faster,

…today’s computer industry wouldn’t exist. The vast cloud-computing data centers run by companies like Google and Amazon would be impossibly expensive to build. There would be no smartphones with apps that allow you to order a ride home or get dinner delivered. And scientific breakthroughs like decoding the human genome or teaching machines to listen would not have happened.” [1]

Much of the success of Moore’s law can be attributed to the scaling down of device (e.g., transistor) dimensions. But device dimensions are reaching atomic scales – and we can’t get much smaller! Instead, people are now looking for new architectures and materials (besides silicon [Si]) to continue improving the capabilities built into computer chips. Candidates include carbon-based materials such as graphene or nanotubes, spintronics (a term my PhD thesis advisor coined!) – making use of an electron’s spin in addition to its charge, or going 3D and stacking components vertically in addition to laying them out horizontally across a chip. The end of the viability of Moore’s law has been on the horizon for a while, going back to at least the early 2000s. In fact, the looming end of Moore’s law was one of the factors that motivated my doctoral work, which I started nearly 10 years ago. Looking into a potential successor to Si CMOS (complementary metal-oxide-semiconductor) technology, I investigated the dilute magnetic semiconductor (DMS) germanium manganese (GeMn). Ge sits below Si on the periodic table of elements, and gives GeMn its semiconductor properties. Mn enables the ferromagnetic interactions which can be turned on or off by applying a bias voltage in a field-effect transistor (FET) type of device (much the way a bias voltage can turn current flow on or off in an FET).

The idea with dilute magnetic semiconductors is that you rely on spin or magnetic properties to define the on/off state of your switch device, instead of whether or not you have charge flowing (e.g., electrons moving). This brings about the benefit of less energy dissipation since you’re no longer relying on current flow to define the state of your device, and less energy dissipation means your computer processor wouldn’t get so hot. But the main issue with GeMn and other DMS materials is that they only exhibit their cool DMS properties at really, really cool temperatures, well below room temperature. And as fond as I am of GeMn, I wouldn’t really want to carry around a cryostat full of liquid helium in order to run my hypothetical GeMn-based iDevice. Fortunately, the semiconductor industry has developed other solutions to mitigate the heat generation issue, one of which involves a distributed approach of splitting tasks among many processors, instead of relying solely on the speed of individual processors.

So where are we with Moore’s law today? When will it end? Experts predict Moore’s law will be no more in the early 2020s [2], [3]. What will next gen computer chips look like? Well, I would normally point to the International Technology Roadmap for Semiconductors (ITRS) for an answer to this question. ITRS roadmap documents are generated by experts and reps of the semiconductor industries of the United States, Europe, Japan, South Korea and Taiwan. However, after nearly 25 years of service, the ITRS will issue its final roadmap this year (2016), and will be succeeded by a new forecasting system called the International Roadmap for Devices and Systems (IRDS) – of which MITRE is a member – that is intended to track a wider range of computer technologies including devices, components, systems, architecture, and software [4].

Although what lies beyond Moore is uncertain, I have no doubt that more cool things are to come.