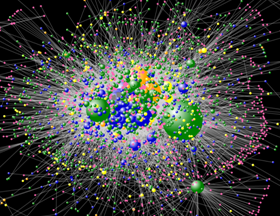 In 2009, “social” was still a buzzword, Facebook was years away from an IPO, and Instagram has not been invented. Yet a groundswell was beginning – people used to the ease of sharing in their online social networks came to their offices, only to find that exchanging information was difficult at best. Communications flowed from the top of the organizational hierarchy down, flooding the already overflowing email inboxes – while cross-organizational collaboration was severely impeded.

A few organizations – notably, IBM and Microsoft – experimented with social media tools (such as blogs and wikis) within the enterprise. Early reports were encouraging, indicating that the exposure that “social” tools provided helped people communicate across organizational silos. Still, there was much trepidation: is this just a fad? Is the return on investment there?

MITRE decided to experiment with social networking by attempting to solve a pressing business need: communicating with external partners. Because of its unique standing as a federally-funded research and development center, MITRE was in a perfect position to make connections between government, industry, and academia. Problem was, connections formed during specific projects frayed over time, and the concern was that knowledge was being lost between engagements. In a space of a few months, MITRE stood up a social network based on Elgg (an open-source project). We picked the name “Handshake”, a nearly universal gesture of welcoming a guest. I still remember the quiet launch at the end of August of 2009, when we opened the doors for MITRE employees and enabled the invitation process for external members. Our plan was to go through the usual communications channels, landing emails in those overflowing inboxes…

… but there was no need. Even before any kind of an official announcement was made, over a thousand users visited the system and started forming connections – the figure above captures a snapshot of the network. Users quickly realized the benefits they could derive from a platform that bridged the organizational firewall and made information sharing easier.

However, one of the biggest benefits reported to us in feedback and survey responses was the transparency that posting to the social networking system brought. Since contributions could be made visible to all participants, users could locate information previously locked in individual inboxes. The “social” aspect of the system made sure that notifications flowed naturally across interpersonal connections and topic-based groups.

Five years in, Handshake is still fulfilling its original mission – and we are continuously surprised at the new use cases that our users come up with. Reflecting back at our experience, I can share five lessons learned:

If there is interest, I can expand on any of these in subsequent posts. Likewise, we’re always curious how enterprise social was embraced in your organizations – so drop us a line! For more information on MITRE’s Handshake, please see the following presentations and papers: